At the age of 12, I bought my first computer: a Commodore VIC-20. It was heaven. Growing up I’d always leaned towards electronics, wires, and electrical tape, and this new gadget provided me with a means to create and really use my imagination. 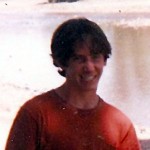 Rick Loe (In his teens)

Within two years, I’d sold a computer game to a computer magazine called “Compute!” While it definitely spurred me on to continue my pursuit in computers, it also helped me to upgrade my antique equipment to something a bit more modern.

After finishing school, I began working as a government contractor for the U.S. Army, and later as a contractor for the U.S. Air Force. My duties included programming, system administration, network security, computer security, system testing and design. I worked on my different systems including Sun, Unix, Windows, and IBM systems where I was able to further my understanding of computers, programming and creating interesting user interfaces.

From 2000 to 2007, my wife and I operated a local newspaper in the Gulf Coast area of Florida. A small, unique newspaper with an interesting following, this work provided me with a wealth of graphic design experience, as well as a deep understanding of paper boy delivery fatigue.

Today I work as a full-time web developer/programmer.